Tetraptych is a laser lumia artwork designed to illuminate the front of the Majestic Theater in downtown Detroit.

My artistic focus has always been concentrated on the interplay of art and technology: primarily the interaction between the audience and light. I try to raise light to its purest level, illuminating our world in novel ways to inspire and awe the beholder. And what better way to condense the perfection of light than by using lasers – monochromatic until combined, linear until artistically altered, coherent until molded by aesthetic enterprise. A purity of color, a movement of line and form, a brightness to rival the natural noon; that is my direction. 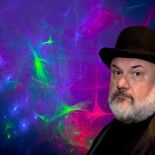 Mike Gould is a Michigan-based laser, graphics, video and electronics artist. He was born and has spent most of his life in Ann Arbor. In addition to his laser activities, Mike works as a commercial photographer.

Mike has been working with lasers, electro-optic components and industrial design for several years. His first experience with laser light in an artistic setting was a Son et Lumière presentation at the University of Michigan School of Education in 1972.

More recently, along with his Illuminatus Lightshow troupe, Mike has designed, created, and presented laser art for thousands of people attending events at leading Michigan hotels. These include the Detroit Marriott Troy, the Hyatt Regency Dearborn, and most recently, the Marriott Renaissance Center in Detroit.

As principal designer/builder/artist with Illuminatus, Mike has assembled, inspired and motivated an experienced crew with talent in electrical engineering, cartooning, machining, software, lawyering, business, and optics.

Illuminatus is a familiar sight at Detroit and other Maker Faires, where the artist and crew demonstrate and explain laser technology.

He has exhibited at Art Prize 2012, where he won an ILDA award for Most Innovative Application in the Artistic Award category at the 2013 ILDA Conference, held in Aalen, Germany. ILDA is the International Laser Display Association, the organization that supports the laser entertainment industry.

In 2013 he presented a 3-month exhibition of his art at the Dow Museum of Science and Art. Entitled L is for Laser, the exhibit consisted of 5 major pieces, one of them interactive. That piece, A as in interActive, allowed visitors to control the laser projection by moving their bodies in front of a Kinect system.

The Hands-On Museum in Ann Arbor, Michigan, is hosting L is for Laser during the late summer of 2014.

His Motto: Lux Plus Esto – Let there be more light.