white code: VIEW consists of a tangible, large-scale graphite drawing on velum (divided into 8 parts) installed on the interior windows to serve as a screen for a looped video rear projection piece visible on the street. The stylized video images of eyes looking and blinking will be merged with satellite images and animations of the location it is installed (space-Earth-America-Detroit-Woodward-pavement), and video documentation of driving down and back the road from 8 Mile to the riverfront. My goal is to make a dual portrait: that of a city being looked at, and of the one doing the looking. This piece has no audio to allow the spontaneous inclusion of unedited local sounds with the experiencing of the piece (pedestrians, cars, other installations nearby, potential music in gallery, etc) in addition to opening up the location as a place for reflection, conversation, and socialization. I am excited about the duality of the location, with both an interior and exterior viewing perspective of the work. The interior perspective also opens up the possibility for people to interact with it, by becoming human shadow puppets, if they decide to place themselves in front of the projected light. 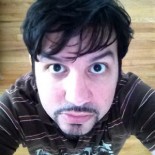