FaShon Vega (founder of GLoW: Detroit™ & BANKAi™: Academy for Heart & Design) has partnered with THREE13 ACTION DESIGN™ to produce STAR TOURS, a strolling live action fantasy performance by world class stunt performers. Guests to Detroit’s long awaited DLECTRICITY™ 2017 event will witness action actors from both sides of force battle it out right in front of them, decked out in some of their favorite cosplay and wielding illuminated “Stunt Sabors”! These cosplay warriors, when not performing, will be available to answer questions & take photos. Multiple battles will take place throughout the night, ending with an epic fight between the light and the dark forces!

Three groups have donated their space, time and expertise to bring DLECTRICITY’s audience the best show in the state! Phoenix Free Running Academy and THREE13 AD have pulled together the states best tracures (parcour and free running enthusiasts), martial artists and stuntmen to transform Midtown Detroit into a galaxy far far away! 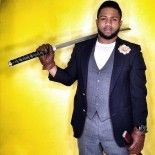 FaShon Vega (BLuE) is Detroit’s own Design Activist. Growing up in DLA (the Dexter & Linwood Area) he developed a sense of urgency to help others. As an all around creative, he appreciated beauty & story. Developing his heart and his eye over the years, he eventually decided not to design cars and use his design mind to service people in the ways they needed it most. As a lifelong martial artist and gymnast, FaShon (like most of us) thought being in movies would be neat, and in 2009 Dan Lemieux and (stunt mentor) Ele Bardha gave him that chance on his first feature film, where he gets shot by Ray Liotta! FaShon is extremely passionate about story and how they affect us, and says "there is no film without stunts, action actors rock!"

“Design is and is only using our minds to solve for human need, be it system or product design, or sound and action! To put humans first, you have to be a good human, first.” - FaShon Vega