Using computer programming, the artists pull images from online based on search queries, stripping the images of their contextual pages and creating improvised video collages. The audience can submit their search queries and enjoy a live jazz improv as well. 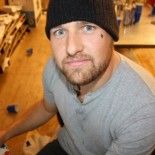 Tim Schwartz grew up in St. Louis, MO. He received a BA in Physics from Wesleyan University and an MFA in Visual Arts from the University of California, San Diego. In January 2010, he developed a technology to help reunited missing people affected by the earthquake in Haiti and now co-runs an organization dealing with family reunification. In 2010, Schwartz spent four months traveling the country in a mobile research laboratory investigating what is lost as archives become digital.

“[He] makes his playful data mashups into sculptures using retired gadgets… Like a field scientist of the information age, Schwartz filters an overwhelming amount of data through the intuitive logic of old-fashioned tools such as weather gauges, maps, and charts. Taken together, his works constitute a kind of contemporary natural history museum in which we are the subjects being examined.”    -Lamar Clarkson, Modern Painters Magazine