menotme is a luminous, playful, responsive form activated by squeezing which causes it to purr, giggle, and burp and is designed to provoke public affection as a defense against post‑industrial anxiety. menotme is an urban comfort object; part street toy, part environment. For Dlectricity, rootoftwo + daub have created menotme to inspire new types of social behavior, interaction and play. Participation is essential. The more you interact with it, the more it performs. Organic in form and feel, menotme creates a comfy place to dawdle during the festival where informal social exchanges and a good cuddle with the work are encouraged. rootoftwo + daub are interested in transforming the urban environment in ways that increase socialization and pleasure. 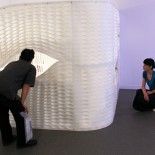 rootoftwo is a hybrid art and design studio, formed in 1998 and co‑directed by John Marshall and Cézanne Charles. Since 2008, rootoftwo have been collaborating with Karl Daubmann, AIA and principal at daub. Both studios are research‑led creative practices and work collaboratively to make experimental objects and experiences, which specifically attempt to disrupt and undermine the systems at work through humor, play, interaction and participation. For example, in THR_33 (premiered at the Museum of Modern Art in Kyoto), we built cute pet-like robotic appliances that would reward museum visitors by performing in response to the visitor smiling. We were exploring the emotional dimension of products to ask if we enter into a relationship with our gadgets might they be less likely to end up in landfill? Our work derives from our interests and observations related to how context informs and transforms behavior and relationships. For Dlectricity we have created menotme, which expands our interest in creating public environments that empower individuals and groups to explore, experiment and interact with the fabric of their city in unexpected ways. Our works create a condition where we can perceive ourselves, the here and now and the future differently.