Orbit is the depiction of the celestial mechanics of a planet spinning through its year. Various trees with their leaves and flowers are blown by turbulent winds conveying the passage of time. Spring, Summer, Fall and Winter form the year. 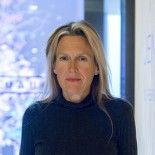 Jennifer Steinkamp (b. 1958, Denver, CO; lives and works in Los Angeles) uses 3-D computer animation and new media to create video installations that activate architectural space and alter phenomenological perception. She designs and digitally simulates movement of organic and abstract forms—trees, flowers. Her works are displayed as site-specific projections that amplify the architectural setting by blurring the boundary between real and illusionistic space. Time plays a significant role in Steinkamp’s work, which often depicts cyclical occurrences such as changing seasons and life cycles.