The Museum of Contemporary Arts Detroit

In You Don’t Say Much, Do You? the sensational scripts of the nightly news are dislocated from their original programming to become raw material for associative wordplay. First shown in 2016 at Swiss Institute / Contemporary Art in New York City, the work pairs dialogue spoken by anchors on nightly news reports with a dictionary of television production commands used “behind the scenes” to find new relationships through a merger of these two coded languages.

In this second iteration of You Don’t Say Much, Do You? for Dlectricity 2017, excerpts from recent local Detroit newscasts will be used as new source material. The work will be produced live, on-site, from a mobile TV van with the aid of the audience themselves, as a 2-channel video projection with sound. 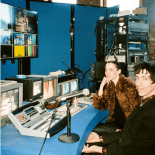 Through [E.S.P. TV’s] attenuation of processes of production and transmission, they actually draw attention to the cultural construction and the symbolic value, within an artworld context, of televisual liveness.”  -Maeve Connolly, "TV Museum: Contemporary Art and the Age of Television"

Directed by Scott Kiernan and Victoria Keddie, E.S.P. TV utilizes a mobile television studio to explore transmission, analog and digital media, and broadcast. Through an ongoing series of live television taping events, they place the control room of the TV studio on center stage, making the means of production into a vehicle for performance. E.S.P. TV investigate the language of television through their practice and have built a strong network through artist collaborations. From this ongoing effort, they have amassed an extensive archive detailing these unique explorations of performance, sound, and vision.