LOCATION:  The Detroit Institute of Arts  “Electric  Park” at Woodward and Kirby

The Shadow Puppet Circus Sideshow uses light and analog overhead projectors to create a series of interactive display booths that pair the visual iconography of old-style amusement parks with Detroit-centric content. Based on painted sideshow banners by artists like Fred Johnson and Snap Wyatt, the Shadow Puppet Circus Sideshow booths use hand-cut silhouettes to cast oversize images of Detroit-inspired sideshow characters (The Man of Steel is Ford power-lifting a Model-T by its axel; the Fire Eater is the Nain Rouge; the World’s Tallest Man is Dave Bing, etc) on carnival cutout displays. Each display is staffed by a sideshow barker encouraging viewers to “STEP RIGHT UP!” and choose the character they wish to pose as, taking Polaroid photos for viewers to keep as a souvenir.

The Shadow Puppet Circus Sideshow is sponsored by: 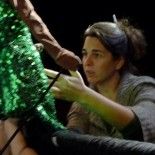 Carrie Morris is a director and performance artist whose work combines puppetry, multimedia, and the gestural language of experimental theater. As a director and puppet designer, her work has been seen at the New York International Fringe Festival, The Athens Museum of Art, PuppetART Theatre, as a guest artist with the Grand Rapids Symphony Orchestra. In 2015 she collaborated with the Bangladesh School of Music in Hamtramck, MI to create the performance 'O Motherland!', a series of shadow puppet narratives inspired and accompanied by Bengali songs. She is a Fulbright grantee for work in multimedia shadow puppetry in Solo, Indonesia, where she completed a series of performances based on local traditions and history in collaboration with Indonesian artists. Carrie's work has received generous support from the Michigan Council for Arts and Cultural Affairs, the John S. and James L. Knight Foundation, the National Endowment for the Arts and the Princess Grace Foundation. She is the artistic director of Carrie Morris Arts Production (CMAP), a venue for puppet and performance works in Detroit. You can see more about her work and upcoming shows at www.cmapdetroit.com.