in::Sequence is an audiovisual participative installation created by Cuppetelli and Mendoza in collaboration with Detroit-based musician Shigeto. The work invites viewers to assume a contemplative state through the use of cyclic video projections on a sculpture made of tulle and accompanied by a synchronized soundtrack. The work exists as a time-based sculpture and as a communal experience. 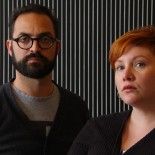 Detroit-based Annica Cuppetelli and Cristobal Mendoza began collaborating as Cuppetelli and Mendoza in 2010. They create installations and objects that combine physical elements with digital technologies, composing sensual, immersive and dynamic experiences. Their aesthetic approach references mid-century art movements such as Kinetic Art, Op Art, and Light Art, but uses interactive video projections, algorithmic design and software-based animations, creating a bridge between the artistic past and present.

Their work has been exhibited throughout the world, in venues such as the Denver Art Museum and Telfair Museums in Savannah, GA, and in numerous festivals such as  Microwave (Hong Kong), Lichtrouten Luedenscheid (Germany), Nemo Festival (France), Scopitone (France), ISEA, FILE (Brazil), among others. They are 2015 Kresge Arts in Detroit Visual Art Fellows. Cuppetelli received her MFA in Fibers from Cranbrook Academy of Art. Mendoza received his MFA in Digital + Media from the Rhode Island School of Design.
BACK TO ALL