Not all vandals wear masks.

Graffiti Grandma arrives in Detroit just in time for Dlectricity to drop some knowledge and to give us some life advice we can all use. 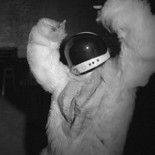 Dawn Of Man is a New York City based digital arts collective, directing and producing works of new media, 3D projection mapping, cinema, video art, and audio. Started in 2008, Dawn Of Man has found a home in creating unique experiences that employ new ideas and technology, while remaining firmly rooted in the ancient human love for storytelling.

Dawn Of Man has presented projection art at the Adelaide Festival of the Arts in Australia, Art Basel in Miami, Heimtextil in Frankfurt, SXSW Austin and NXNE Toronto Festivals, and at the Westbeth Gallery in New York. Work by Dawn Of Man has also been commissioned by the Museum of Modern Art, the New World Symphony, Microsoft, Sony Playstation, the New York Times, Viacom, SLS and Mondrian Hotels, and the Brooklyn Arts Council, among others. Dawn Of Man’s founder, SpaceMonkey, also appeared at the very first Dlectricity in 2012.