Every Side of Here uses light, audio, and movement to evoke a spectrum of sacred experiences. Moving through the lifespan of a day, the project draws from personal routines, nature, club culture, and faith traditions. Live-projected stained glass animation and sculptural metalwork layer with electronic sound and silhouetted performers to create a saturated encounter that seeks wonder in unexpected places.

The audience is invited to join us in creating a participatory mural that explores diverse ideas about “the sacred.” Performances will take place in the courtyard lawn at First Congregational Church. Audience members enter an interactive stage space through a metal and stained glass archway. Performances run for 30 minutes and recur on the half hour mark of each hour throughout the night, starting at 7:30pm. 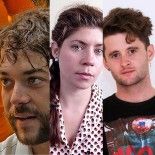 Based in Detroit and Brooklyn, Sebastian Duncan-Portuondo, Angela Eastman, and Maxime Robillard collaborate to bring light, structure, music, and movement together.  Angela and Maxime met in 2008 in Colorado, and have since collaborated on sculptural and sound projects, most recently at the Vermont Studio Center in 2016.  Hailing from Miami, Sebastian brings his expertise in creating projected environments that draw on community history and shared memory.  Both Sebastian and Angela are current MFA candidates at Cranbrook Academy of Art.

Sebastian Duncan-Portuondo creates lyrical artworks as architectural interventions, performances, and installations. He re-envisions formal traditions in stained glass and light-based media, in order to participate within cultural geographies, community history and shared memory. Sebastian has worked with dancers and artist collectives including Sound and Vision and Southernmost Situations. He has exhibited internationally and nationally including at the Museo de Arte Contemporaneo in the Dominican Republic, NADA Art Fair, Vizcaya Museum and Gardens, and Locust Projects. Sebastian is from Miami, FL, and recently relocated to the Detroit area as an MFA candidate at Cranbrook Academy of Art.
Angela Eastman is an artist working in sculpture and performance. Her interactive artworks explore the role of ecology in collective identity, and often involve audience participation and elements of play. She studied sculpture at Colorado College and completed a two-year fellowship at Penland School of Crafts, and has exhibited her work nationally. She has been the recipient of residencies at Vermont Studio Center, Sitka Center for Art and Ecology, Woodstock Byrdcliffe Guild, and the Ragdale Fountaion. Angela has been involved with ARTLAB J dance company in Detroit, and is currently an MFA student at Cranbrook Academy of Art. www.angelaeastman.com

Maxime Robillard is a musician and producer living in Queens, NY. His music ranges from piano and sound collage pieces for performance to releases in house and techno. He worked with the Danish experimental theater company Hotel Pro Forma as a set designer for their original production "Cosmos+." In addition to music, he works as a furniture maker, installation artist, and set designer for photo and video shoots. He studied at Colorado College and recently completed a residency at the Vermont Studio Center. Currently Maxime is working on a line of furniture and home goods and a third EP for his music project, Love Letters. www.maximerobillard.com