LOCATION:  The Prentis Building at Warren and John R

Carnival Love Wall is a modular projection mapping work consisting of dozens of small animated elements that can be assembled, much like toy blocks or LEGO blocks, to create a complete animated surface that can be remodeled and shaped to accommodate almost any architecture and/or structure.

Carnival Love Wall celebrates the resulting complexity of deceptively simplistic systems, like a molecule, a living organism or an entire community. Taken singly, each element’s motions are simplistic and repetitive. But when joined by many others and contained within an architectural form, they are much greater than their constituent parts, creating a monumental, dynamic, and playful mosaic of motion and color.

Carnival Love Wall is supported by: 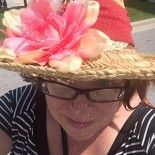 Kelley Bell ​holds an MFA from the University of Maryland, Baltimore County in Imaging and Digital Arts, and a BFA in Graphic Design from Pratt Institute. Her animations have been screened locally and as far away as Zagreb, Croatia. Screenings include the Visionary Arts Museum in Baltimore, Maryland, the Annapolis Film Festival, The Transmodern Arts Festival Baltimore, Maryland, and the University of Maryland College Park. She was a recipient of the Maryland State Arts Council Individual Artist Award in 2004, and 2013, a semifinalist for the Sondheim Art Prize in 2010 and 2011, and a Robert Rauschenberg Foundation Artistic Innovation And Collaboration Grant in 2013.

Never one to think small, her large-scale public projections have appeared in numerous festivals like the InLight Festival in Richmond, Virginia, the Lumen Festival in Staten Island, New York and the Northern Spark Festival in Minneapolis, Minnesota, and Animafest Zagreb in Zagreb, Croatia. Her projection series, The Clock Strikes 100, celebrating the 100th anniversary of Baltimore, Maryland’s BromoSeltzer Tower was named Best Public Art Project by Baltimore Magazine in 2011. She is an Associate Professor and Associate Chair of the Visual  Arts Department at University of Maryland, Baltimore County.