LOCATION:  The Detroit Institute of Arts outside of the Detroit Film Theater

The Shadows of Slendrotron (The Monkey God’s Great Leap) is a robotic theatre production inspired by the aesthetic of traditional Javanese shadow puppetry and gamelan orchestra. The libretto is adapted from the Hindu epic the Ramayana and centers on the adventures of the demi-god Hanuman, who aids Prince Rama in locating his wife, who was kidnapped by Ravana, a demon king. The production is a complex combination of automation, puppeteering and music, with robots acting out a pantomime of the story spun by a narrator, all accompanied by orchestration played by a electro-mechanical gong and drum orchestra.

The Shadows of Slendrotron (The Monkey God’s Great Leap) is supported by: 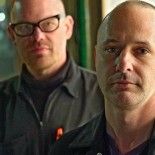 Apetechnology is a electro-mechanical art and sound collective operating out of Detroit’s New Center area. The core premise of the design of their electro-mechanical devices is to explore the intimate but uneasy relationship that humans have developed with their own creations. They refer to their work as Detroit Retrograde Futurism, a reference to the Italian Futurists from the turn of the last century. they look back on the future that they celebrated; with their hindsight from Detroit, the heart of the twentieth century’s industrial dynamo, they seek to illuminate the consequences of fetishizing speed, violence, machinery and proto-fascism and ponder the implications for the future.

Every design of their machines starts with raw materials and rough sketches, and is engineered and expanded from first principles. While the machine coalesces around the idea that was its genesis, it often takes on new capabilities and interpretations as hidden things latent in its ‘personality’ come to light. Each machine has its own name and is as much a member of the gestalt as the humans.

Chip Flynn began his career as an electromechanical artist in 1988, when, as a high school graduation present, he received a plane ticket to join the infamous San Francisco group Survival Research Laboratory led by electromechanical pioneer Mark Pauline. He studied robotics for three years before leaving his home state and moving to San Francisco in order to work with S.R.L. full time. Seeking more artistic freedom, he formed a parallel group to S.R.L. named Peoplehater in ‘92. Peoplehater retained strong ties to S.R.L. and was the only collective ever to perform alongside the original group with even billing.

In 2002 he returned to Detroit to embark on a new creative path that focused on more aesthetic design of the machines coupled with expanded multi-media accompaniment of the shows. Some of Chip’s many notables include: Ars Electronica in ‘96; the Car Hunt ‘95; a profile in Spin Magazine; a stint as lead mechanical with M5 Industries (the sfx shop which has transformed into the television show MythBusters); Eric Orr’s Electrum Project; and numerous small and large gallery and festival shows.

Leith Campbell works at the intersection of technology and creativity, attempting to find new, more organic methods of expressing meaning and emotion through the use of technological means. Ranging from avant garde electronic music composition through to mobile electro-mechanical (robotic) sculpture, there are few mediums under the rubric of technology he has not touched on in the past ten years. Starting initially as a student of improvised music, he has parlayed the free form aesthetic of improvisation into the logical system of the algorithm; instead of improvising himself, he gives the machines the rules and directs them to improvise. In the style of John Cage and Brian Eno, he would far rather be surprised than in total control. He has a Bachelors in Music Technology from Wayne State University and a Masters of Media Arts from the University of Michigan.

Leo Garza is a self-taught artist who began his professional career working in set design and illustrating for point of sale visual display. As visual director and illustrator for several toy companies this path eventually led to a position at FAO Schwarz Toys. As San Francisco Visual director and corporate design team member Leo was fortunate enough to design sets and graphic displays for kids. The next stop was assistant cell animating at Curious Pictures Studio until crossing paths with Jamie Hyneman, owner of M5 industries and of MythBusters fame. Leo stayed on board M5 Industries for ten years eventually becoming S.A.G. Puppeteer, Shop supervisor, and Partner. He also was a contributing editor to “Robot” magazine. Leo moved on to design and build with the model maker greats at Kerner Optical formerly known as ILM for several years. Since then has freelanced as a model maker for multiple studios including Laika and Disney/Pixar. More recently Leo has art directed for stop motion writer/director Martin Meunier on several independent projects. Leo is currently employed on a Top Secret Mission from outer space.

Apetechnology's installation, The Shadows of Slendrotron (The Monkey God’s Great Leap), is supported by: