Reenactor is an ongoing video projection that will run continuously in both daylight and nighttime, from 7 PM September 22 until midnight on September 23.

The film Reenactor depicts a small swarm of performers dressed in Confederate Civil War uniforms and white beards speckled with droplets of blood who wander the streets of a small southern city. The film begins in a bed and ends in a cemetery. The camera, like in a documentary, simply follows the performers as they enact various scenes: scrub a floor, bathe a child, climb stairs, wrestle in mud, hand out flyers and eat a mysterious red substance. The group invade a convenience store, haunt a mall, picnic in a junkyard and at times lie very still with trickles of blood flowing from their mouths. The pace of the film is unhurried and meditative using voice-over and music to create a tone which vacillates between the world we live in and the world that haunts our past.

Reenactor is a film about how we costume and theatricalize time in order to make sense of our past, our mortality. We dress reality up in history, documentary, biography, or art to re-stage and re-order the chaos of getting from one side of life to the other. Reenactor is a three and half hour old timey dress up dream play. I call Reenactor my Civil War film but the war I’m referring to is any great trauma that marks the land and its people such that ghosts are spawned and made restless in memories that haunt our living landscape. Most of the film was shot in the city of Nashville, Tennessee, in 2009 and 2010. Footage of historical reenactments was shot in Pennsylvania and New Jersey.

Live soundtrack performances by local musicians Marcus Elliot and Ben Willis will take place on Friday and Saturday evening during the festival hours of 7 PM to midnight.

Reenactor is supported by: 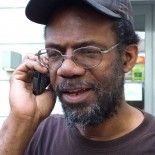 Pope.L is a visual artist and educator whose multidisciplinary practice uses binaries, contraries and preconceived notions embedded within contemporary culture to create art works in various formats, for example, writing, painting, performance, installation, video and sculpture. Building upon his long history of enacting arduous, provocative, absurdist performances and interventions in public spaces, Pope.L applies some of the same social, formal and performative strategies to his interests in language, system, gender, race and community. The goals for his work are several: joy, money and uncertainty— not necessarily in that order.