A large part of my practice as a painter involves language. My use of neon as an artist is greatly influenced by growing up in Highland Park in view of the YELLOW PAGES and HOSTESS signs of old Detroit. These three works specifically address politics, history, and relationships. Putting these personal thoughts in an historical form used specifically for mass communication makes them public, and public admissions are rare in our current political moment. By manifesting the loss of an icon of a critical and engaged press; the affirmation of Detroit as a site of learning, and dismissing blame as an sustainable position, my work in light creates sites of public consideration of our shared personal and political consciousness.

Thank you to MOCAD and Samsøñ Gallery for the loan of this work. With support from Spectrum Neon. 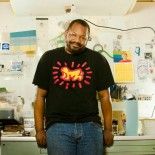 Steve Locke was born in 1963 (Cleveland, Ohio), grew up in Detroit, Michigan and lives in Boston. In 2013, Steve Locke exhibited in his first solo museum exhibition there is no one left to blame, Institute of Contemporary Art Boston curated by Helen Molesworth, Barbara Lee Chief Curator . In 2014, there is no one left to blame travels to the Museum of Contemporary Art Detroit. Crossing Against exhibited in Paint Things: Beyond the Stretcher (2013) deCordova Sculpture Park and Museum with catalog and Group Show, Samsøn (2013). In 2013 Steve Locke exhibited in several group exhibitions including White Boys, curated by Hank Willis Thomas and Natasha L. Logan, at the Cantor Fitzgerald Gallery Haverford College, and Recent Acquisitions Leslie-Lohman Museum of
Gay and Lesbian Art NY (2013). Steve Locke is a recipient of the Louis Comfort Tiffany and a Pollock-Krasner grant (2014). He has received a Contemporary Work Fund grant from the LEF Foundation, and a travel grant to Turkey from the Art Matters Foundation. He has received multiple nominations for the Joan Mitchell Award and the Foster Prize from the Institute of Contemporary Art, Boston. In 2008, he was the visiting professor and artist in residence at the Savannah College of Art and Design. He received his MFA from the Massachusetts College of Art & Design in 2001 and holds Bachelor’s degrees from
Boston University and MassArt. He currently is an Assistant Professor of Art Education at the Massachusetts College of Art & Design. Steve Locke is represented by Samsøn in Boston, Massachusetts. He is the proud product of a Jesuit education.