Time I Change exists as a circuitous loop. The video represents through a single human form the migration to cities in the early 20th Century; the way Detroit and the image of its’ residents changed throughout that century; and the current migration of Detroit’s residents out of the city.

Featuring Detroit-based dancer Stringz, this video was initially released as a segment of the ongoing series The Future is Changing: Rituals for Spatial Transformation. This specific experiment explores the relationship of video to human movement in depicting change. 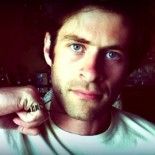 Oren Goldenberg is a producer and video artist living and working in the Cass Corridor where he uses video as a primary tool to explore the dismantlement of the public sector, subvert the assumed and create catharsis. His projects have included: The Future is Changing, an ongoing video and technology series concerning spatial change and coping rituals; Our School, the feature documentary on Detroit’s public schools; Brewster Douglass, You’re My Brother about America’s first public housing project; the feature film The Bicyclist; and the satirical web-series Detroit (Blank) City. He is a 2013 Kresge Artist Fellow, a 2009 University of Michigan Roman J. Witt Visiting Artist, Ann Arbor Film Festival’s 2006 Best Michigan Filmmaker, and Real Detroit’s 2011 Best Detroit Filmmaker.