The Nature of Things is an animation and video installation comprised entirely of images taken directly from the paintings of American artist Thomas Everett Green. The work is inspired by biology and contemporary microscopic photography, and explores the patterns and cycles of how destructive forces in nature slowly creep in, settle, take over, and destroy a surrounding. Furthermore, The Nature of Things reverses the space relationship between the individual and the microscopic specimen, forcing the individual to question the importance of the specimen and renegotiate their preconceived ideas on beauty. 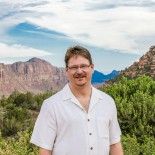 Thomas Everett Green (b. 1970) explores biology and microscopic photography through painting, sculpture, and video installations referencing nature. He holds a  BFA from Middle Tennessee StateUniversity, and an MFA from Memphis College of Art, where he was the 2012-2013 recipient of the Hohenberg Fellowship, and currently works as an adjunct instructor. His work has been shown in New York, Nashville, Memphis, Seattle, and the Arkansas Arts Center in Little Rock. He worked as curator for the Center for the Arts in Murfreesboro Tennessee 2011 and 2012 and has contributed to publications including Taxi Art Magazine of Guadalajara, Mexico and Number: Inc. an independent journal of the Arts for Tennessee, Mississippi, and Arkansas. Currently, he works as an independent curator, president, and host of the online publication Featherjett Fine Arts. He was recently included in the 2014 Bumbershoot music festival, and in the collections of Le Bonheur Children’s Hospital.