A mobile faceted sculpture that is an intimate immersive environment in its closed state, and an open air pavilion and performance venue when open. Featuring performances by Tzarinas of the Plane and other acts. 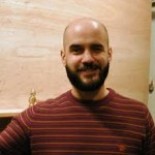 Sculptor Graem Whyte draws from mythical, cultural and scientific references to fuse fragments of disparate elements together into larger cohesive wholes. Injected with layers of whimsy and humor, Whyte’s mixed media sculptures open a dialogue about the future and how we relate to a world that has been greatly demystified.

In his most recent body of work, Whyte revisits and refi nes elements of his past work in miniature landscapes to invite the mind to dream about the magic and mystery in the world around us—to honor the past, while envisioning a better future.