Mining the aesthetics of cinema and science fiction, The Erudition presents an almost lunar-esque looking landscape with what appears to be an unlikely monument or proposal, consisting of holographic trees blowing in fictional wind. Strangely, they spark and fizz into and out of life, as though malfunctioning, or low on energy. Are we witnesses to a forgotten site of proposed colonization on another planet? Or to the wrecked remnants of this one? As the critic Murray Whyte has written, “there is a sense of a very distant future trying to recreate in virtual space something it never actually knew. Richardson produces a future-world that was stored in the dull chill of a hard-drive: gone and forgotten, but forever clickable.” 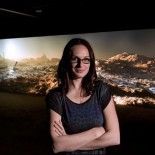 Recognized as one of the leading representatives of a new generation of artists working with digital technologies to create hyper-real, highly charged landscapes, Kelly Richardson has been widely acclaimed in North America, Asia and Europe. Her work was selected for the Beijing, Gwangju and Busan biennales, and major moving image exhibitions including the The Cinema Effect: Illusion, Reality and the Moving Image at the Hirshhorn Museum and Sculpture Garden (Washington, USA) and Caixaforum (Barcelona, Spain), Videosphere: A New Generation at the Albright-Knox Art Gallery (Buffalo, USA) and Visions Fugitives at Le Fresnoy (Tourcoing, France). Her video installations have been included in the Toronto International Film Festival as part of Future Projections (2012), Sundance Film Festival in New Frontier (2011 and 2009) and in 2009, she was honored as the featured artist at the Americans for the Arts National Arts Awards. Richardson’s work has been acquisitioned into significant museum collections across the UK, USA and Canada, from the Hirshhorn Museum and Sculpture Garden and Albright-Knox Art Gallery to the National Gallery of Canada, Art Gallery of Ontario, Musée d’art contemporain de Montréal and the Towner.