The Black Pot, by animator Nathalie Djurberg and musician Hans Berg, was shown at the Garage Center for Contemporary Culture, Moscow in 2013, when the artists began experimenting with newly abstracted animations and ambient electronica within a darkened, womb-like environment, in order to depict the cycle of life.

Sponsored by The Detroit Institute of Arts 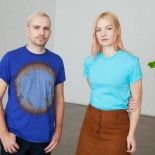 Mixing animation, sculpture and sound, Nathalie Djurberg and Hans Berg create psychologically charged scenarios dealing with human and animalistic desires. Since 2001, Djurberg has developed a distinctive style of filmmaking, using clay animation to dramatise the basest of natural instincts from jealousy, revenge and greed, to submission and lust. Her partner, the musician and composer Hans Berg, creates the atmospheric sound effects and scores the hypnotic music for Djurberg’s animations and installations. In 2004 they began working closely together as a duo to create transgressive narratives rich in symbolic meaning and emotional reach, mining allegorical myths and grotesque, nightmarish visions in humorous, carnivalesque pieces such as Tiger Licking Girl’s Butt and We Are Not Two, We Are One. The artists’ interdisciplinary collaborations increasingly blur the cinematic, the sculptural, and the performative in installations that pair moving images and musical compositions with related set pieces or built objects.

Nathalie Djurberg and Hans Berg currently live and work in Berlin. Born in Lysekil, Sweden in 1978, Nathalie Djurberg received her MFA from Malmö Art Academy in 2002. Hans Berg was born in Rättvik, Sweden in 1978 and is a musician, producer and composer, working mainly with electronic music. They have exhibited widely together in group shows, including the 53rd Venice Biennale in 2009, while recent solo shows include The Parade at the Yerba Buena Center for the Art, San Francisco; New Museum, New York and Walker Art Center, Minneapolis (2011-12); A World of Glass, at the Camden Arts Centre, London (2011) and ICA Boston (2014); as well as The Black Pot at The Garage Center for Contemporary Culture in Moscow (2013).