My work investigates the increasingly blurry line between real and unreal, and the role technology plays in influencing the images we see every day: how we read and interpret them, how they are presented to us.

I am a multifaceted artist constantly positioning myself within the borders of a deliberately conflicted landscape. I present a world in which video, 3D animations and sculpture merge in artworks that explore the discomfort of ones own nature; a world that is infatuated with the duality of disaffection; and challenges notions of assumed reality.

This video is part of a series titled SACRIFICE, inspired by violent political events and the body in movement. Created in 3D, rendering human skin as an extreme expression—an ecstasy of the body, an explosion of colors and an exaggeration of shapes—the artworks are a combination of illusion and reality, a violent dance of the mind, and an ironic game with multiple layers of perception. Through the video we encounter the character in various states of ecstasy and prostration, pleasure and pain, victory and defeat. The body is not only violent, it is also erotic: “In essence, the domain of eroticism is the domain of violence,” said Georges Bataille. 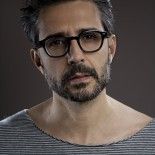 José Carlos Casado (Spanish, b. 1971) is an artist with a multifaceted practice, using technologies to create work involving video, 3D animation, sculpture, photography, installation, and performance. His work examines the ideas behind universal experiences such as birth, fear and sex and the role technology plays in influencing the images we see every day. He also explores digital technologies to abstract the physicality of movement from the body.

His work has been shown in multiple solo and group shows internationally and has won numerous prizes and recognitions, including a grant from Picasso Foundation, a scholarship from LaCaixa Foundation, MIT’s Leonardo Excellence Award, and two New York Foundation for the Arts Fellowships.  He has participated in more than 20 international New Media Festivals, including Sundance and ArsElectronica. He has been an art resident at the Vermont Studio Center, School of Visual Arts, Anderson Ranch Residency, and Swatch Art Peace Hotel Residency in Shanghai.Casado started 2014 as a resident at The Watermill Center, culminating on a solo show titled “Sacrifice”. In May, he had a solo exhibition of new work in Madrid. He has also been invited to participate in two public art projects: Water Tank Project in NYC and Broadway Augmented in Sacramento, and will be sailing the Arctic in October, part of the Arctic Circle Residency.In 2013, Casado had two solo exhibitions in Shanghai and one in Madrid and
was invited to create a Swatch Art Limited Edition watch, presented at the 55th Venice Biennale. He was also commissioned to create a video installation for the singer M.I.A.’s album release party in Brooklyn. Casado founded NY/Anantapur in 2010, a foundation to raise funds to build schools in India. Two schools have been built so far and are used by more than 500 children and adults, as primary schools and civic centers. A MFA graduate of the School of Visual Arts, Casado has been based in New
York for 16 years.