This site-specific installation will react to a viewer’s motion through interactive light projected upon a structure made of strings, creating fluid and dynamic interference patterns on the illuminated surface. (Located inside Welcome Center.) 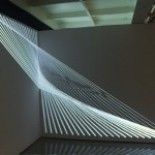 Annica Cuppetelli (USA) and Cristobal Mendoza (Venezuela) began their artistic collaboration in the Fall of 2010. Their work has been exhibited in the Biennial of Video and Media Arts (Chile, 2012) and festivals such as FILE 2011 (BRA), FAD 2011 (BRA), video_dumbo 2011 (NYC, USA) among others. Cuppetelli obtained her MFA from Cranbrook Academy of Art (Fibers, 2008) and Mendoza at the Rhode Island School of Design (Digital Media, 2007). Mendoza is an Assistant Professor in the Department of Art and Art History at Wayne State University in Detroit, MI, where they are based.