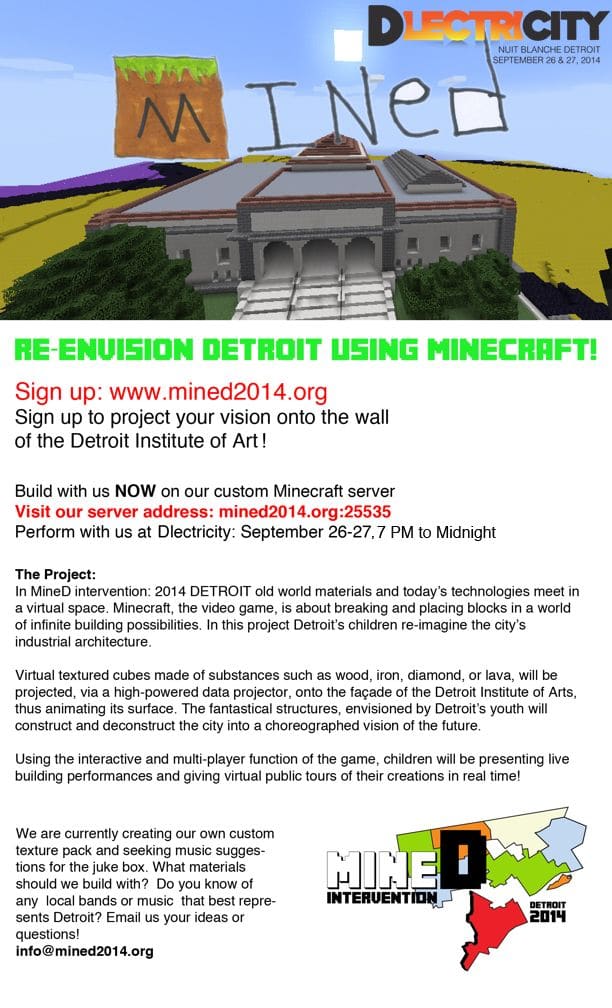 In MineD intervention: DETROIT 2014 old world materials and today’s technologies meet in a virtual space. Minecraft, the video game, is about breaking and placing blocks in a world of infinite building possibilities. In this project Detroit’s children re-imagine the city’s industrial architecture. The project playfully situates children as designers, exploiting game technology as a means for empowerment. By emphasizing the interconnectedness of space and people through large-scale projection, the game is inverted.

Virtual textured cubes made of substances such as wood, iron, diamond, or lava, will be projected, via a high-powered data projector, onto the façade of the Detroit Institute of Arts, thus animating its surface. The fantastical structures, envisioned by Detroit’s youth will construct and deconstruct the city into a choreographed vision of the future. We can imagine virtually deconstructing the side of DIA projecting fountains of flowing lava, doorways to underground caves, or user controlled explosions.

Using the interactive and multi-player function of the game, children will be presenting live building performances and giving virtual public tours of their creations in real time! Sign up to participate at http://mined2014.org 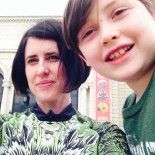 This project is a collaboration between artist Rebekah Blesing and a group of Michigan State Students and Staff, teens, and lots of children!

Rebekah Blesing is a MFA Candidate in Sculpture and Graduate Assistant in Electronic Arts and Intermedia at Michigan State University. Her current research centers on play, game theory and social practice. She has worked extensively as a children’s arts instructor with the YMCA, Peace House and the Kalamazoo Institute of Arts. While pursuing her MFA at Michigan State she is also a summer Visual Arts Instructor at Interlochen Center for the Arts. 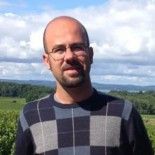 Dylan Wahl is an MSEE candidate and teaching assistant at Michigan State University. Prior to graduate school, Dylan designed automotive electronics at Gentex Corporation. He is a research assistant at the MSU-DOE Facility for Rare Isotope Beams and he is also a visual and performance artist.

Pazau Moua is an undergraduate Graphic Design Student at MSU with a specialization in Design.