An extroverted mass projects its interior mechanism to create its own atmosphere, prompting a dialogue between the rational topography and its dislocated environment. The projected imagery builds in superimposed layers around the space. As light leaks and pools across the façade of the central form it leaves pinhole after-images and sweeping slivers of light that take over and complicate the bulky mass.

Through reduced means using cardboard boxes, light bulbs and lenses, a rudimentary projection device is created wherein the light source is simultaneously the image. The light bulb itself, as an updated quintessential pop object, also evokes searchlights and observation instruments. As the light source, image, and instrument become collapsed, a picture of contemporary self-surveillance emerges. 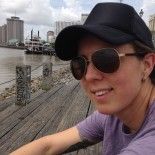 Charlotte Becket lives and works in New York City where she is also an Associate Professor at Pace University. She attended Hunter College’s MFA program and received her BFA from the Cleveland Institute of Art. Solo and two person exhibitions include Valentine Gallery NY, Crisp Gallery in London, LEAP in Berlin, Taxter and Spengemann in New York City as well as group exhibitions at Gazelli Art House in London, Anna Kustera, Lorimoto, NY Studio Gallery, Passerby and the Invitational Exhibition Academy of Arts and Letters in New York City. She has been invited to lecture on her work at various galleries and universities and has been the recipient of grants from The Joan Mitchell Foundation, The Tony Smith Foundation, and the Verizon Foundation. Her work has been reviewed in The New York Times, TimeOut London, ArtForum, and Art in America, among others. She was recently included in, 100 Artists, a compendium of interviews with 100 international contemporary artists by Francesca Gavin.