Let’s Dance is a spontaneous collaboration between you and me. Together we will create a multimedia dance party, where the music and visuals are curated by me and manipulated by you. Get ready to be an artist, a dancer, a club kid, a VJ, a photographer, a DJ, a wall flower, or whatever you feel like. Let’s Dance will blur the lines between artist and spectator, art show and party; allowing us to question what is art, and what is our relationship to it. 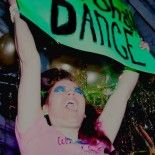 Mikki Olson is a Brooklyn based multidisciplinary artist who began experimenting with music, set design and performance art in her punk/experimental band The Merdivorators. Based in San Diego and later in San Francisco, these shows were a practice in combining mediums, creating interactive installations and viewer participation. Upon relocating to New York, Mikki became one-fourth of the JUDY collective, curating and creating multimedia nightlife events. In 2011, JUDY was awarded the FUN Fellowship in the Social Practice of Nightlife, by the Museum of Art and Design (MAD)  NYC. Mikki has performed at MIX Festival 2007(NYC), Art Basel 2008(Mami), Galerie Giti Nourbakhsch 2008(Berlin), Brooklyn is Burning 2009(Brooklyn), Hijinx 2009(Brooklyn), Queer Conscience Festival 2010(Brooklyn). Mikki is currently working as Set Designer for the film Dance Bitch Dance, directed by Maureen Catbagan.