A bright point for Detroit in the last 30 years has been its celebrated music scene. Bands like MC5, Patti Smith Group and the White Stripes have come out of Detroit. And while the city’s economy has been sliding, the art and culture scene has been expanding.

The Leland City Club capitalizes on the building’s historic past, which is punctuated with Mob activity, suicides, supposed hauntings. With events such as ‘Zombie Night’, or the ‘Heaven and Hell’ Party, they celebrate the complexity of life (and death) and the edgy energy of the city of Detroit.

The Legendary Leland City Club is a site-specific single channel film, projected on The Historical Museum exterior, that shows people celebrating life in the way they do getting ready to go out for the night to dance with friends, being transported by the music they will hear in the club.

The space of the dance is a space where the spirit attempts to transcend the body–a state that can be seen in the face of someone who is truly transported by the dance. 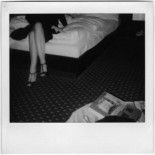 New York-based artist, Sue de Beer’s (b. 1973) craft finds its bearings in sculpture, photography and installation, with a focus on film. Various themes are woven into her compositions including 18th Century Puritan America, adolescence, haunting and ideas of a never-experienced memory. De Beer plays on notions of vision and perception, repetition, color saturation and dramatic lighting for an often phenomenological experience of her work. De Beer received her BMF from Parsons School of Design, New York (1995) and MFA from Columbia University, New York (1998). She has exhibited internationally in New York, Berlin, Los Angeles, Marfa, Antwerp, Munich, Athens and Amsterdam. Her work is included in collections such as The Brooklyn Museum, New York; The New Museum of Contemporary Art, New York; The Deste Foundation, Athens, The Whitney Museum of American Art, New York; The Goetz Collection, Munich, The Museum of Modern Art, New York and the Seattle Contemporary, Seattle. De Beer is an Associate Professor of Art at New York University. The artist recently participated in an artists-in-residency program in Abu Dhabi in conjunction with Westbeth Center for the Arts (January – May 2014) and was featured at this year’s film sector at Art Basel. De Beer is currently in production on a new film created in collaboration with DLECTRICITY, the Nuit Blanche project in Detroit, MI this September.