Drawing on the sculptural qualities of a beam of laserlight, Laser Starship, a new artwork, projects high specification multiple rays of colorful laser light surrounding the center atrium glass globe of the C.H. Wright Museum of African American History. The artwork comments on elements of Afro futurism for a site specific laser ‘mothership’ in Detroit. 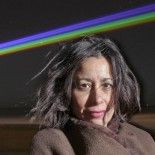 Yvette Mattern is a New York and Berlin based visual artist whose work has an emphasis on video and film, which frequently intersects performance, public art and sculpture. Her work has been exhibited internationally. Her ongoing monumental laser light installation ‘Global Rainbow’ premiered in the UK for the London 2012 Cultural Olympiad in February of 2012.