In Icelandic ‘Kindur’ means ‘sheep’ and this is a show dedicated to Iceland seen through the eyes of its adventurous sheep. All the territory of this island is pervaded by a fairytale like atmosphere. From the white of its glaciers to northern lights, from geysers to the rumble of gigantic waterfalls, this is a country where every natural element seems animated by mysterious forces. Let’s take sheep: locked inside a pen for the cold season, they can then taste full freedom travelling by themselves or in small groups from spring to autumn. In their journey they have the opportunity to dip inside the remotest nature and visit its ‘hidden’ inhabitants, elves and trolls. In their journey the sheep protagonists of ‘Kindur’ show us this secret world, strong and fragile at the same time, capable of communicating children the extraordinary beauty of nature.

This story is told by three dancers who interpret three sheep. What makes the show special is that all the audience is invited to be part of a big flock of sheep. At the entrance every child is given a special heart, it is a woollen heart that lights up when it is time to take an active part in the show. In some cases kids are invited on stage in small groups, at other times all the hearts light up at the same time and this means that it is possible to interact on the stage, together, from our seats. 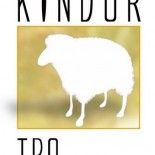 Compagnia TPO was founded in Prato, Italy in 1981 as a children’s theater company devoted to creating works that are highly visual and multidisciplinary in the use of the genres of music, dance, art, sculpture, digital media, computer technology, lighting and sound. TPO is an award-winning, internationally recognized company who believes in creating dance/theater works for children that are visual and conceptualized moving paintings which use movement, artistic objects, mechanical and digital devices and the interplay of lighting, all geared to a child’s eye.

In 1999, Davide Venturini and Francesco Gandi became the artistic directors of TPO With the emerging technology that has evolved, TPO has grown more and more on the use of digital technology, graphics, video and how to combine these elements with the more traditional art forms of dance, theater and music.

TPO has created new methods of interaction between performers, the audience, and stage spaces by applying computer sensors and triggers to images and sound, and they have found new ways to collaborate with a variety of artists: dancers, actors, directors, musicians, engineers, designers, writers and illustrators to create new works. These concepts have created fame and a reputation for TPO throughout Europe, Australia, the United States, South America and Canada.