The results of the mortgage crisis as well as ongoing economic downturns (acutely seen in the loss of neighborhoods of many depressed US towns and cities) highlights the true fragility of that most American of dreams, that of ownership of house and home. The sculpture, in its use of fluorescent glass tube lights as the structural material in the construction of a simple representation of a house, highlights this fragility, an inherently stable construct made from an inherent delicate material, a stones throw from being destroyed.

This proverbial glass house flickers its lights on and off in what at first is a seemingly random strobic pattern, eventually settling into blinking in Morse code the last lines of Ionesco’s Rhinoceros, “I’ll take on the whole of them! I’ll put up a fight against the lot of them, the whole lot of them! I’m the last man left, and I’m staying that way until the end. I’m not capitulating!” The house, structurally tenuous yet determined stands surrounded by the ever threatening imagined rhinoceroses, here, perhaps no longer Ionesco’s metaphors for the perceived threat of fascism, but allusion to contemporary forces that jeopardize the house, the home, the American dream. 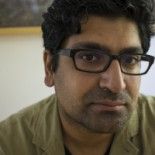 Osman Khan is an artist interested in constructing artifacts and experiences for social criticism and aesthetic expression. His work plays and subverts the materiality behind themes of identity, home/land, social and public space through participatory & performative installations and site-specific interventions.

He is a recipient of an Art Matters grant, Ars Electronica’s Prix Ars Award of Distinction and The Arctic Circle 2009 Residency.