Future Pleasures is a moving image project which will embed a series of character based
animations into the physical environment of Detroit. The project will introduce a set of animated characters set in visionary maquettes displayed through multiple projections. A variety of unique characters that are partially inspired from the locale of Detroit will be the main element of the project. The animations will produce imaginary narratives inspired by the illusions of a fragmented reality from the city. Viewers will experience and respond to the fantasy world incarnating the spirits of Detroit. 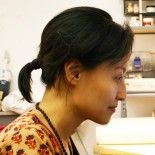