Shaun Gladwell is renowned for his mesmerising studies of the body in motion, set against the backdrop of gritty urban environments or remote landscapes. The dual-channel video installation Broken Dance (Beatboxed) continues his engagement with the nexus between embodied expression and urban sub-cultures. One channel of the video depicts the vocal percussions of a beat-boxer; the other focuses on gesture, tracing the ‘freestyle’ motions of
dancers who merge the genres of break-dancing, krumping and whacking.

Although the performances occurred at different times and locations, Gladwell’s synchronizing of the two video channels constructs a dialogue between them, as though the sound in one is catalyzing the movement in the other. While this aspect of Broken Dance (Beatboxed) highlights the artifice of video installation, the action unusually plays out in ‘real-time’. In contrast to many of Gladwell’s earlier videos, which are slowed to distort the effects of speed and gravity, here the emphasis is on the unmediated virtuosity of the
performers and the powerful unconscious effect of sound on the body.

The contexts for the performances are also significant. The dancers execute their moves against the backdrop of graffiti covered urban spaces, invoking the notion of sub-cultural activity as a mode of resistance and reclamation within public zones where behavior is now obsessively surveyed and over prescribed. On the other hand, the vocalists are situated in a studio context, perhaps a signal toward how such cultures of resistance are eventually commodified and ‘mainstreamed’ by the relentless thrust of consumerism. 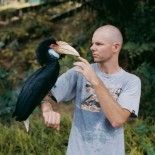 Gladwell completed Associate Research at Goldsmiths College, University of London, in 2001 and has since undertaken international residencies and commissions in Europe, North and South America, and the Asia Pacific Region. In September 2006 he was the recipient of the Australia Council for the Arts’ prestigious Visual Arts Fellowship.