Atlantis Dance City is a rear projection light show and installation based on the futuristic designs of Sun Ra; the legendary ‘70s Detroit dance show The Scene and Diver Dan; an underwater puppet show for children broadcasted in Detroit during the early ‘60s. Audience participation is encouraged by wearing a mask and costume, then following the dance runway through the set. The entire installation is shot through an aquarium and projected to give the effect of being underwater. Live music is provided by Monster Island: Efe Bes, Jimbo Easter, Matthew Smith and Cary Loren. 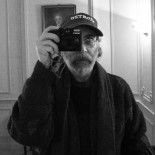 Cary Loren (b. 1955, Detroit) is an artist, musician and writer. In 1973 he apprenticed with New York City performance artist and filmmaker Jack Smith, and was a founding member of the Destroy All Monsters collective. In 1995, he began Monster Island; a collective that mixes music with video, performance, shadow theater and installation art. His sound project Cannibal released their first LP this year with Primary Information. His work has been shown at the Whitney Biennial of American Art in 2002; Printed Matter and Performa 2009, in NYC; the American Academy in Rome, 2010; the Luff Festival, 2012 in Lausanne, Switzerland and MOCAD in 2012, Detroit. His work is in the permanent collection of the Pompidou Centre in Paris and the Museum of Modern Art in NYC. He is co-owner of the Book Beat in Oak Park, MI, since 1982.