The large-scale installation Immortal Uterus was inspired by the massive laboratory production of the first immortal cells. These ‘immortal’ cells were stolen from African-American sharecropper Henrietta Lacks’ cancer cells in her cervix and used for a multi-billion dollar industry that supported the first vaccinations for polio and countless other medical breakthroughs. The vast, sculpture was woven together from yards of nameless VHS film. The replication of Lacks’ cells was transformed into the idea of an anonymous, massive black womb into which the viewer could enter, as if entering another world. Inside the installation also emitted a sound that was created to constantly multiply, crescendo into infinity. 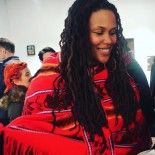 Jasmine Murrell is a Detroit native interdisciplinary artist. She has a BFA from Parsons School of Design and an MFA from Hunter College. Her works has been exhibited nationally and internationally for the past decade, in venues such as the Museum of Contemporary Art and Bronx Museum, African-American Museum of Art, Art Basel, MoMA and the Whitney Museum.  Her work is an expansion of the black body, which aims to cultivate this vast story of not only resilience but also resounding  sublime vitality in the face of annihilation.